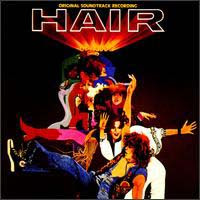 Lynda at Remote Control wrote a recent post about her love of the soundtrack to the "American Tribal Love Rock Musical", Hair. I have the very same LP she has, the original Broadway cast recording. My parents purchased it around the year I was born so it was something I listened to growing up.

Then, when I was about 11, a groovy family friend took me to see the film version of Hair (starring a very hairy Treat Williams and Beverley D'Angelo in snoot mode -- bizarrely, they later also starred together as Stanley and Stella in the 1984 made-for-TV remake of Streetcar Named Desire).

As a young teenager, I was suitably shocked and titillated by "Donna", "Colored Spade" and "Sodomy". I was also confronted by the scene in the movie when a prison psychiatrist asks Woof (the character played by Donnie Dacus from the band Chicago) if he is sexually attracted to men. (Long hair was naturally equated with effeminacy, and male effeminacy with homosexuality. It was an era sorely in need of Judith Butler). Woof responds with the delightful:

"I wouldn't kick Mick Jagger out of my bed, but uh, I'm not a homosexual, no."

But as an adult, I can laugh at the tragically hip way the music in Hair attempts to capture the right-on vibe of the 1960s. For me, Hair always felt like a 70s contrivance of the 60s, much like Happy Days sought to reconstruct the 50s in the 70s. I now also flinch a little at the casual use of the word "pederasty" in the song "Sodomy" (used simply because it rhymes with "nasty"). They're probably claiming the sexual rights of consenting free-lovin' hippie teenagers but this flippant usage trivialises its more serious implications of child sexual abuse.
Posted by Sam @ 12:25 pm