Warning: Before you proceed, this post is NOT about koalas. Yes, such a thing is possible. Although an act of animal benevolence does feature towards the end. 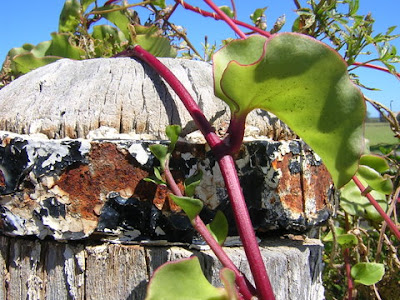 D___ and I went on a day-trip to Trial Bay Gaol on Saturday. It's about an hour and quarter's drive from Port Macquarie, taking the Pacific Highway to Kempsey and then heading towards South West Rocks. Although we were so engrossed in the conversation we were having (ie what I was going to do with my life besides koala-wrangling and blogging-about-koala-wrangling) that we were half way towards Wauchope before we realised we were going the wrong way.

We drove through some picturesque little towns — Frederickton (given the predictable diminutive of 'Fredo' by the locals, Smithtown [presumably 'Smitho'?], and the melodious-sounding Bellimbopinni — littered with single-lane bridges and interesting configurations of rust and flora. 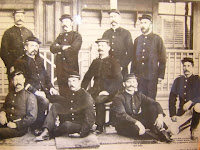 The gaol is an impressive, if pint-sized, edifice constructed of pink and grey granite. It was erected in 1886, a time when they took Movember seriously, all year round, judging by the picture of the original prison officers at the site. 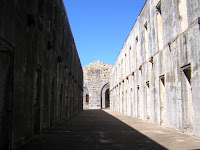 The prisoners' main job was to build a breakwall as ships were habitually being drawn into the beach and running aground there. (Trial Bay was actually named for a brig called the Trial which came to grief in 18-oh-sometime). However, the granite being quarried for the breakwall was horrendously heavy and the project was doomed to failure. After about 15 years the prison was abandoned.

It was reopened during the first world war as an internment camp for Germans living in Australia (how bizarre, Germans seem such nice people!). At least then the prisoners were allowed to spend their days on the beach and were only locked up at night. Some amused themselves by painting borders of scenes from home around their cells. 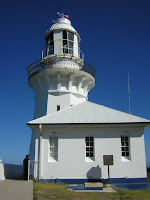 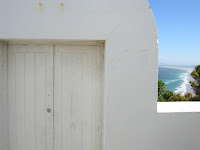 After the gaol we headed to the nearby Smoky Cape Lighthouse. I'm quite besotted with our own lighthouse in Port so like to check out any other lighthouses that we come across. The Smoky Cape Lighthouse has a proper lighthouse shape (unlike ours which is more like a tin shed with a dome stuck on as an after-thought). It also has huge sweeping white walls that give it an almost Mediterranean feel.

After we finished fossicking about the lighthouse, we headed in to South West Rocks for a bevy at the pub. It's interesting comparing different sea-side towns. Port seems like a metropolis compared to this place, although it does have a Thai takeaway with a cute name.

It was getting on to 6pm when we finally headed home. We were gunning it up the Pacific Highway, just on the other side of Kempsey, when we noticed a dog walking along the road in the direction of Kempsey. D and I both said 'is that a dog?'. D___ turned round at the rest stop a few k's on and drove back until the dog was in sight. It could have been a dingo as it was a nondescript browny colour but, as soon as it saw our car pull up, it crossed the road towards us.

He had no collar but was super-friendly -- clearly a pet and very used to people. Yet the only logical conclusion we could come to was that this beautiful dog had been abandoned by its owners on the highway. He wasn't in bad shape -- a bit of a skinned knee, his coat could use a wash and he seemed to have fleas. He jumped in the car with us without a moment's hesitation and accepted all the patting and stroking on offer. D___ had the bright idea of lining her hat with a plastic bag and filling it with water so our new friend could have a drink. 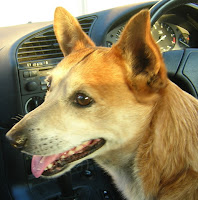 With our hitch-hiker in tow, we headed back to Port and to our vet, who I knew would take in a stray dog. There was no question that we could keep him. Troi can barely cope if we show any attention to the cat (which therefore takes attention from him). Plus he doesn't like any other dogs, people, birds, insects, etc. So we sadly drove our little friend home, knowing that he would probably end up at the pound and possibly worse. And he was such a friendly dog! He didn't snap or even bark the whole time he was with us in the car. He just kept looking out the window, probably trying to search out his home...

Boooooo... Bring back the koalas.