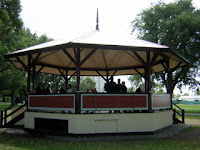 So my brother, TonTon, married his fiance, Lena, on Saturday at the rotunda in the park, right by the water at Williamstown. Despite temps topping 40°C in the preceding weeks, Saturday was cold cold cold; about 15°C (or so it felt to me, although D said it was more like 20°C) with an absence of humidity and bracing wind. This made us a motley crew -- everyone had to cobble together a warmer version of their original outfits. I had on the black cardie, Mum popped a plum jacket over her sundress, one of TonTon's friends up from Sydney had to make do with a kiddie jacket cast off by one of the bridesmaids. 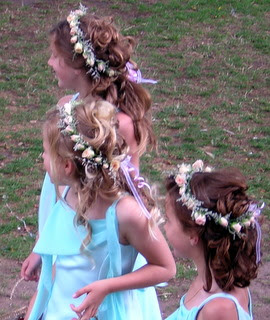 The bride was glorious in a long cream-coloured frock and strappy purple heels. The bridesmaids, my two neices and their best friend, all looked stressed wondering was the right moment to start flinging rose petals at Elena as she was led to the rotunda through the park by her cousin, Mikhail (not Gorbachev). TonTon was beaming from ear to ear and we all cried and snapped pictures like paparazzi. D was on video duty but we still made eye contact when the celebrant reminded us that a marriage in Australia is the joining of a man and a woman... That brings to mind a clever bit of stand-up Ellen DeGeneres does on her DVD Ellen DeGeneres: The Beginning.

She talks about th anxiety that seems to surround conservative people when gay marriage is brought up. They seem to jump straight from same-sex marriage to interspecies marriage like, you can easily go from wanting to marry your girlfriend to, say, wanting to marry a goat. She then proceeds to imagine what it would be like going out with a goat...

But I digress...there was a lovely part of the wedding vows in which Elena actually makes a verbal commitment to TonTon's two girls. It was a beautiful touch. Then we all headed for the pub and then onto the reception place. Mr Lamborghini's son was having his reception at the same place (no really, it was the guy who owns the franchise in Australia, apparently). So there was a host of burly Italian blokes milling around the entrance, while inside there was a placard congratulating Giovanni and Charlene (obviously an Aussie girl). Parked outside on the pavement was a lamborgini with the license plate "LAAMBO". Don't you hate typos?

The reception was fun -- it's been so long since I've been to a wedding I'd forgotten how much fun they could be. We were at a table with my younger brother and a host of TonTon's friends, one of whom is a the CEO of publishing firm. We had an interesting chat about what she looks for in the covering letter on a book manuscript -- not even the manuscript itself, just the letter. Basically if you say your book's going to sell a million copies, it gets chucked to the bottom of the pile. She's looking for a bit of humility. If you're cocky in the letter, you'll be cocky all the way through the process from editing to marketing. For example, Tim Flannery, the new Australian of the year, is in her stable of authors and he's a right nob apparently. It's an interesting power play going between the author and publisher. A new author's offering up what feels like their first born, while the pubisher wants, well, somebody emotionally unattached. Not a great combination.

The great thing about being at a wedding with a large Russian contingent (well four Russians anyway) is that the vodka shots keep on flowing. Elena kept standing up and proclaiming "more Russian drink". You gotta love a sister-in-law like that.
Posted by Sam @ 2:17 pm